It can be difficult to know which drink to choose when faced with all the options at Starbucks. They aren't cheap either, so you want to make sure you're getting something you're really going to enjoy.

Raspberry drinks are making a big comeback in recent years.

In this guide, we'll introduce you to some of the best Starbucks raspberry drinks that you need to try this year.

Does Starbucks Even Have Raspberry Flavored Drinks?

Raspberry has long been a favorite flavor and pairs well with dark, milk, or white chocolate. The tart raspberry contrasts with the sweet chocolate to give a more balanced flavor, and it's not as sweet as strawberry can be.

The basis for all raspberry Starbucks drinks is their raspberry syrup, which had to be discontinued during the pandemic due to shortages. But! Starbucks has just announced its return, so it's the perfect time to find some new raspberry coffees to try.

While some other coffee shops have some raspberry options, they don't have anywhere near as many as Starbucks, and we've put together a list of the drinks you have to try this year. 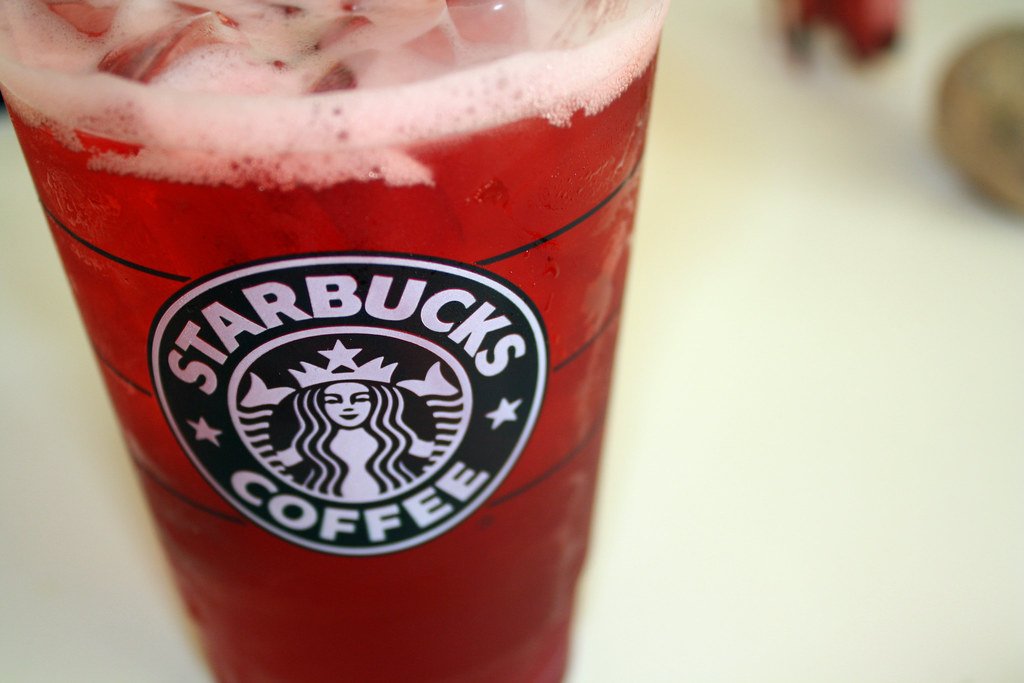 This secret recipe isn't found on any standard Starbucks menu, but it's definitely worth checking out. It looks and tastes like a holiday dessert and is perfect for a hot summer's day.

If you are wondering how do you order a raspberry mocha from Starbucks, you need to ask for an iced white mocha made with eggnog instead of milk (a common option in most Starbucks).

Then ask them to add raspberry sauce with 1 pump for tall, 2 for grande, and 3 for venti. This will give you a creamy red and white drink that’s sweet and tart.

This drink works well because it combines the rich flavor of chocolate with tart raspberry to give you a flavor explosion.

It’s around 500 calories for this combination with 34 grams of carbs and 30 grams of sugar, so while it could easily become your favorite drink, it's not the best choice if you're on a diet.

Raspberry iced tea is the perfect summer season drink. It's popular with tea drinkers and those trying to avoid caffeine. Plus, it's under 35 calories, so you can drink it without compromising your diet.

It isn’t on the standard menu so ask for half iced green tea and half iced black tea with 3-5 pumps of Starbucks raspberry syrup. It’s really refreshing, and you’ll be able to get free refills if you have a Starbucks reward card.

Many people think of tea as an old person drink, but the introduction of flavored, sweet teas has made them really popular with the younger generation. It only has about 8 grams of sugar, and it's one of the best cold raspberry drinks around. 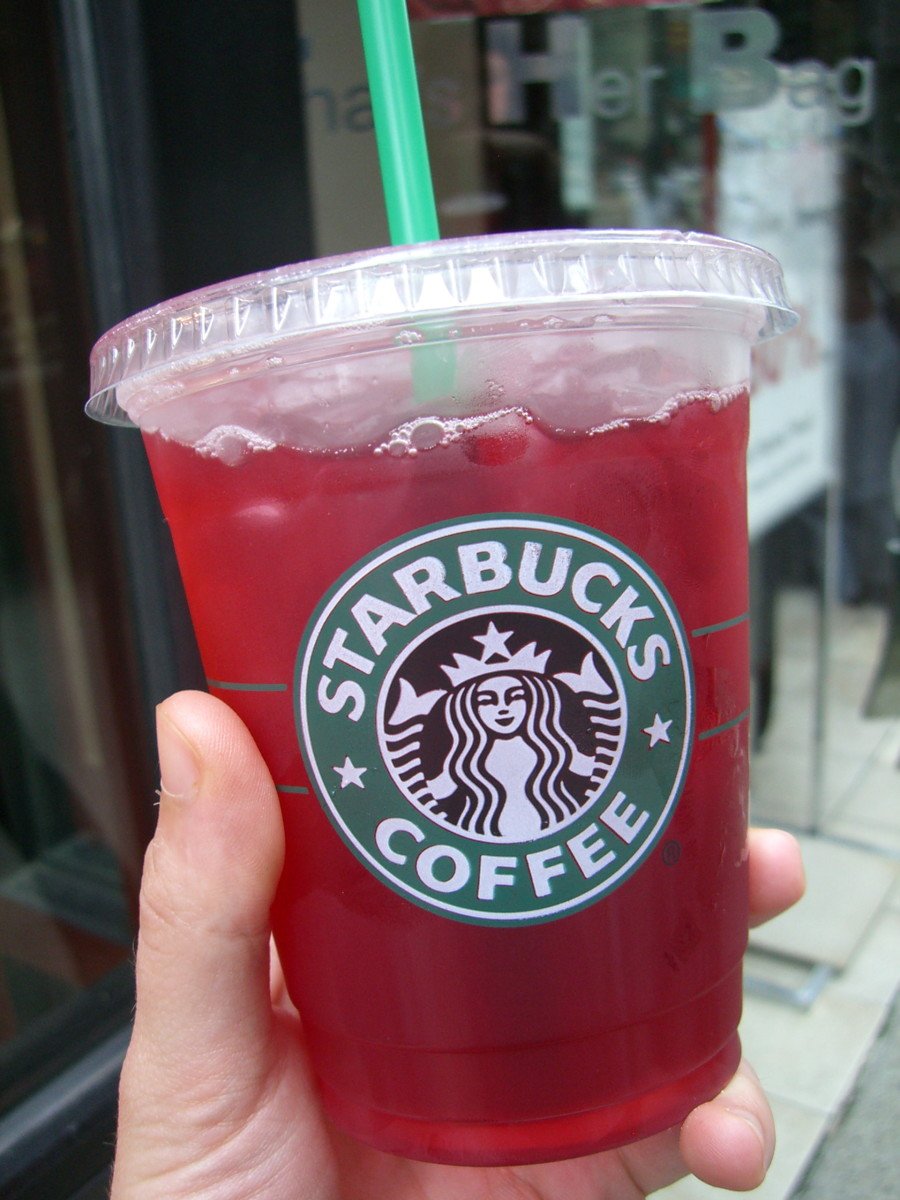 Nothing beats a cool lemonade when the sun is out, and the Starbucks raspberry lime refresher is a great twist to try. It’s only about 80 calories and has no caffeine content, so it's great for kids, though it does have over 20 grams of sugar.

This should give you an ice cool refreshing drink with a mix of lime, lemon, and raspberry flavors. For a more filling drink, you can opt for a crème base but remember to take the lime slices out, or it will curdle! 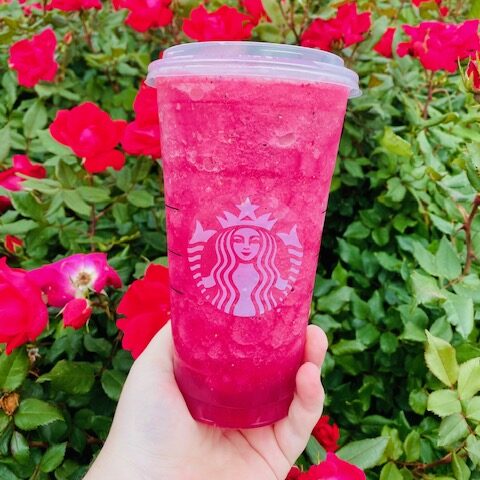 Unless you've been living under a rock for the past few years, you've probably heard of bubble tea.[1] The popular Taiwanese drink is tea-based, with a creamy texture that delivers intense flavor.

The Starbucks raspberry milk tea is very similar to bubble tea, but it doesn’t have the signature tapioca pearls that you’ll find in other bubble tea brands.

To order it, you'll need to ask for an iced black tea made with half and half instead of water. Then, ask for an extra pump of syrup, 2 pumps of toffee nut syrup, and 2 pumps of Starbucks raspberry syrup.

If you're making it yourself then you could look at adding a few tapioca pearls, but currently Starbucks don't stock them.

The result is an amazing Starbucks raspberry milk tea which is tasty all year round. It might not be the healthiest choice at 250 calories and 35 grams of sugar, but it’s proving to be the favorite drink for raspberry lovers. 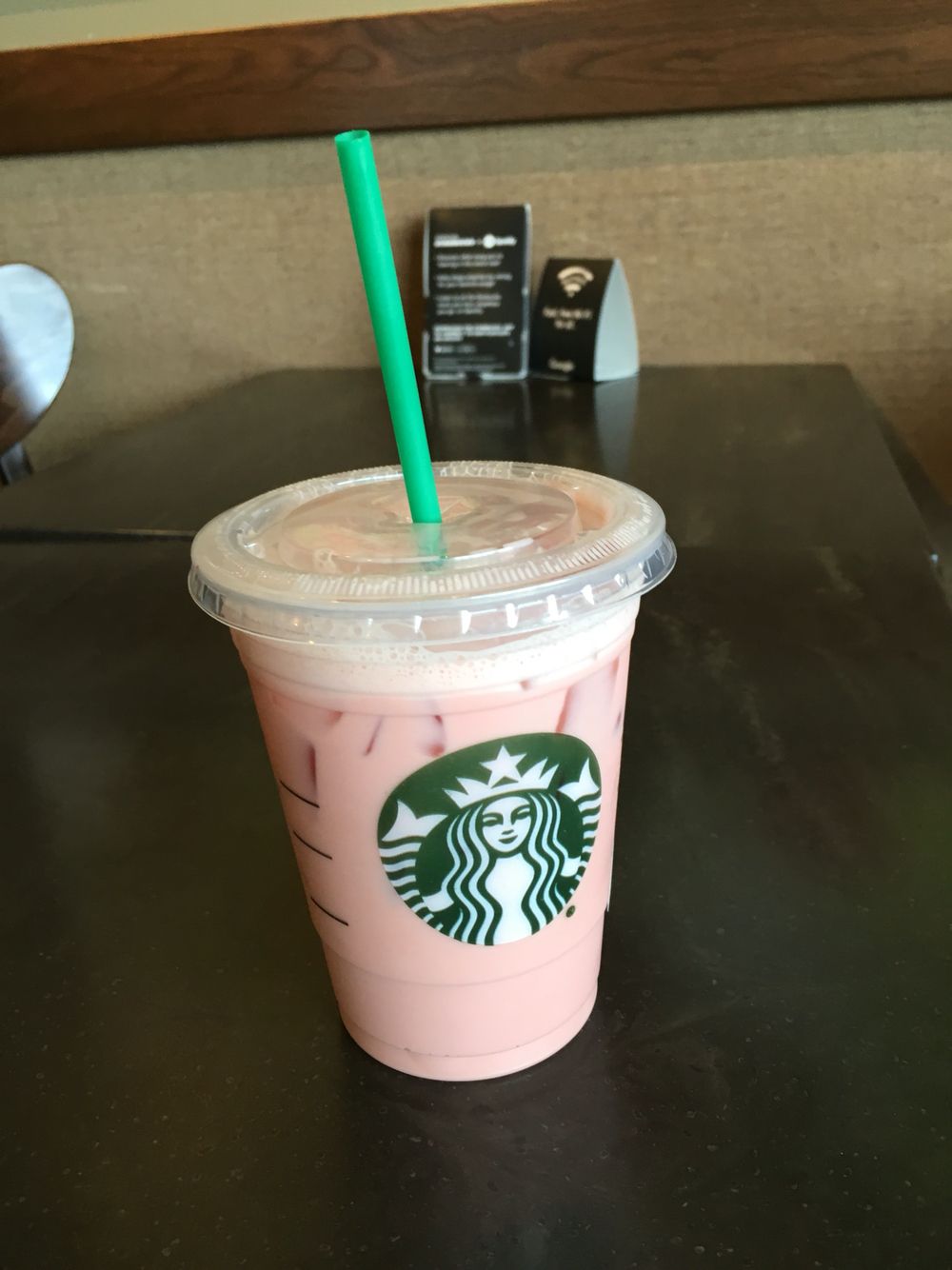 A macchiato has been a popular drink with coffee enthusiasts for years. It’s essentially an espresso with a small amount of foamed milk on top to make it a bit lighter.

A caramel macchiato has a caramel syrup and milk foam base, with an espresso poured on top and a caramel sauce topping. It gives a rich, sweet coffee that balances out the bitterness of the espresso.

Some people will have reservations about putting raspberry into the mix, but it's amazing. To order it, ask for a caramel macchiato but replace the caramel syrup with the raspberry.

There are 250 calories, 30 grams of sugar, and 150mg of caffeine in each, so it’s not the healthiest option, but it's a flavor you need to try. 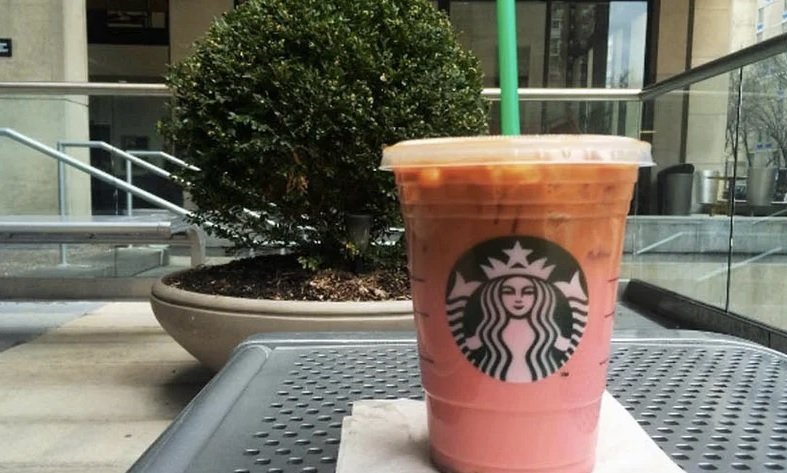 Everyone loves an iced latte when the sun comes out, and the Starbucks raspberry edition is an excellent variation on a classic.

It's simple to order; just ask for a regular iced latte with raspberry syrup flavoring. It gives it a lovely color and a slightly bitter taste from the raspberries to stop it from being overly sweet.

An iced raspberry latte has about 150 calories and 11 grams of sugar, so it's not the unhealthiest Starbucks drink. It has 150mg of caffeine, roughly the same as a regular espresso, and you can customize the milk just like you would with any other latte.

Frappuccinos are the modern summer coffee that is like a richer version of an iced latte. They generally consist of a blended iced coffee with a flavored syrup and topped with cream.

If you want the ultimate indulgence, then you need to try and raspberry chocolate dream Frappuccino. It marries the flavors of coffee, chocolate, and raspberry in a way that makes it feel more like a dessert than a drink.

To order this Starbucks Dream Frappuccino, you need to ask for a vanilla bean frappuccino with 2 pumps of raspberry syrup, white mocha sauce, cinnamon syrup, and cream.

If you want a little extra, ask the barista to drizzle the top with mocha and a half pump of raspberry too.

This isa light beverage, but it isn’t a healthy drink with over 300 calories and 35 grams of sugar. However, it’s a treat to drink and perfect for anyone with a sweet tooth.

Combining passionfruit with raspberry gives a good balance of flavor, and it's a great alternative to your traditional iced tea. Order a passion fruit iced tea and ask them to add 2 pumps of raspberry syrup and blend like a Frappuccino.

If you aren’t bothered about calories, you can also top with whipped cream to make it even more delicious.

This drink looks amazing and is under 100 calories (if you keep the cream off). It's also less than 15 grams of sugar, so it's a slightly better option than some other Starbucks drinks. 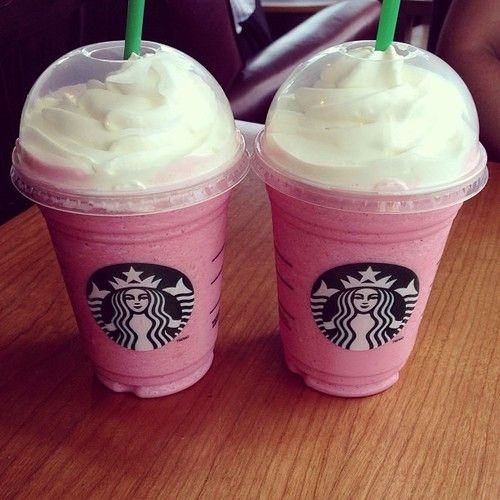 This Starbucks drink is very similar to the Raspberry Chocolate Dream Frappuccino but with a little bit more of a raspberry flavor. You can order it with regular chocolate syrup, or change it up with white chocolate sauce which pairs really well with the raspberry.

You order it the same way but ask for raspberry cream on the top instead of regular whipped. It’s another very indulgent drink that should only be had occasionally, but it’s incredible. If you love sweet Starbucks drinks, you'll enjoy this frappuccino. 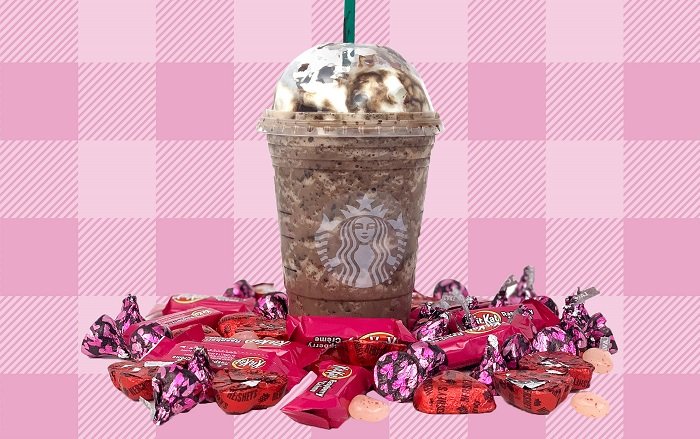 If you want a nice, warm, liquid dessert, then this latte will do the trick. It's smothered in a rich caramel topping, which gives way to the raspberry flavored coffee underneath, giving you all the layers you would expect from a raspberry cheesecake.

One of these provides over 400 calories, 40 grams of sugar, and 150mg of caffeine, so it definitely isn't a healthy option and probably one for a special occasion rather than every day.

To order, ask for your usual Starbucks latte with 5 pumps of flan syrup, 3 pumps of cinnamon syrup, and 2 pumps of raspberry syrup. Get caramel whipped cream on the top and coat with extra flan syrup for maximum flavor.

This isn't a light beverage, and it's probably the least healthy drink on our list, but it's really popular with students and younger people. 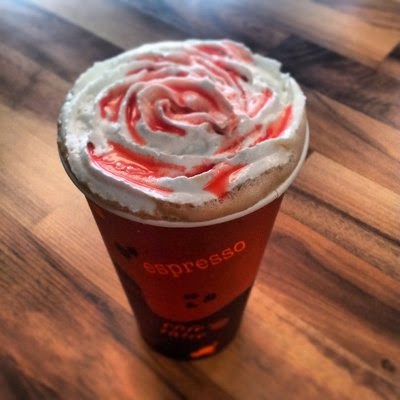 Mojitos are the ultimate summer drink, and while this Starbucks version doesn't have any alcohol, it is packed with flavor.

To order it, you'll need to ask for a green tea lemonade with 1 pump of peppermint syrup and 2 pumps of raspberry syrup on a crème base. It’s less than 150 calories, under 20 grams of sugar, and basically 0 caffeine, so it's a good option for kids and works for anyone on a diet.

This drink is popular with those who like a light, crisp, summer drink and the tartness of the raspberry really adds to the flavor. This is definitely one to order in your local Starbucks during the summer season. 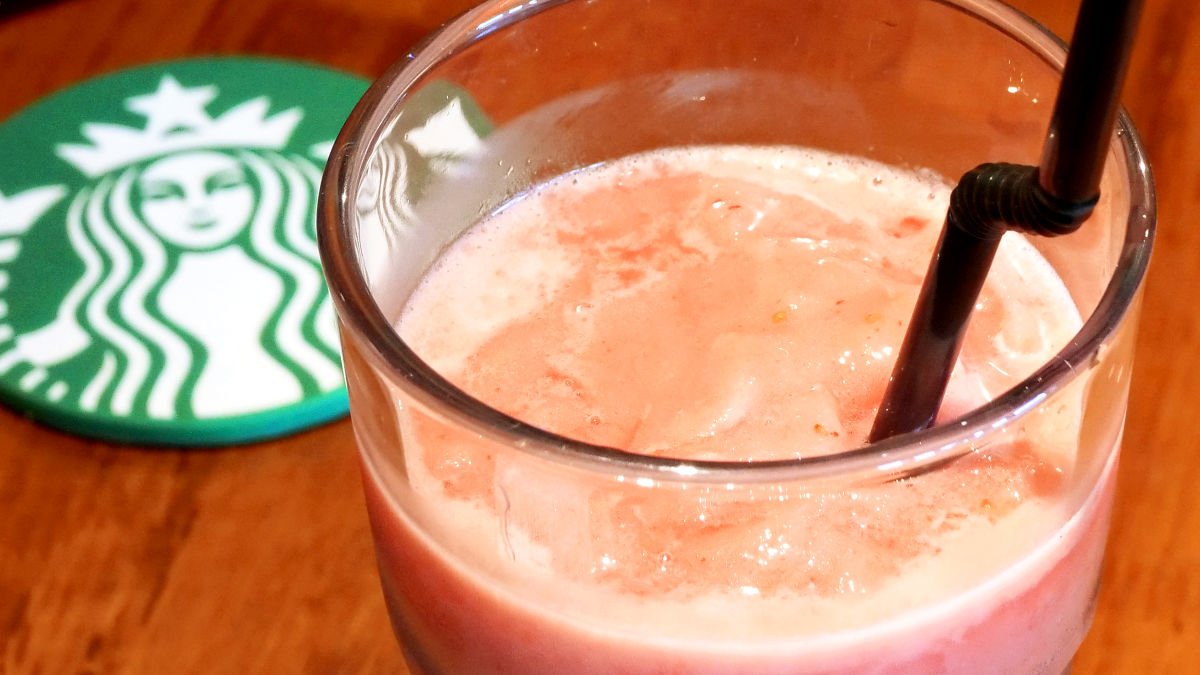 Yes, Starbucks discontinued raspberry syrup during the pandemic because of ingredient shortages, but they've now brought it back so you can enjoy all your favorite drinks.

What brand of raspberry syrup does Starbucks use?

Starbucks syrups are all Starbucks branded, but they are all made by Fontana.[2]

Is the raspberry syrup at Starbucks sweet?

Yes, the raspberry syrup is sweet but still has a tartness that helps stop it from being sickly sweet.

Does Starbucks have a raspberry lemonade?

It generally isn't on the Starbucks menu, but if you ask for lemonade with 2-3 pumps of raspberry syrup, it gives you a lovely raspberry flavored lemonade.

Starbucks has a wide selection of fantastic raspberry drinks if you know what to ask for.

Hopefully this guide has introduced some options that have your mouth watering, and you know which you want to try on your next visit to your local Starbucks.