If you're a fan of keeping your coffee simple and don't need all the fancy fixings, then you're probably used to ordering a plain old "black coffee." But what you probably didn't realize is that there are multiple methods for making that black coffee, like using a French press or resorting to the classic pour over brewing.

Although the end result is similar, there are some differences between French press vs. pour over coffee. Understanding the difference between the French press and pour over method will ultimately allow you to choose which coffee-brewing technique is right for you.

The first French press originated sometime in the mid-1800s in - you guessed it! - France. However, it was actually officially patented in the United States in 1929 by an Italian man. No matter where you consider the official origins to be, the French press is most popular in the US and Europe.

The first French press device was very basic, and although modern coffee presses have gone through a lot of modifications to get where they are today, the coffee-making concept remains the same. It is made up of 3 main components: an open-topped glass (also called a carafe), a push-down plunger, and a filter. 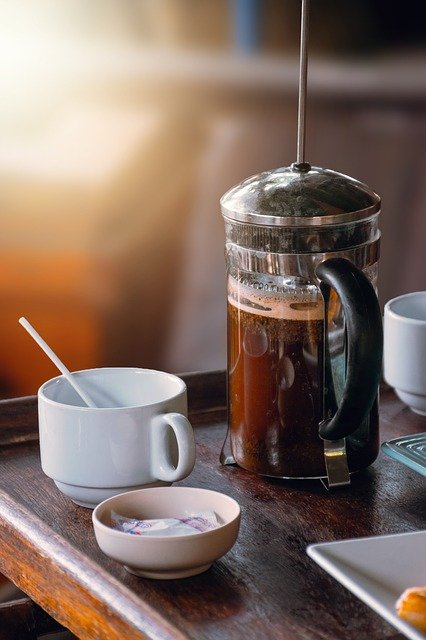 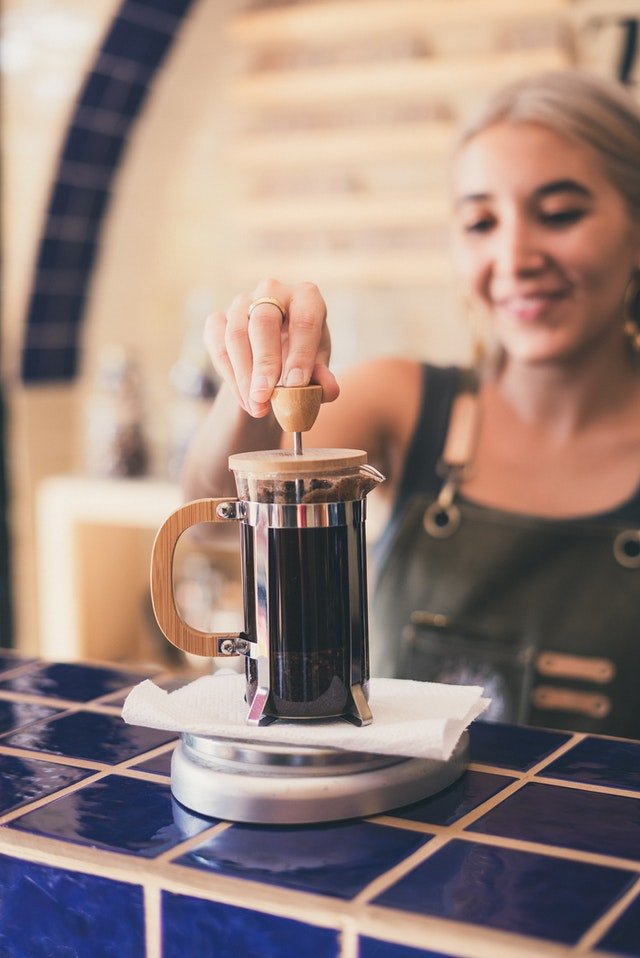 It works by filling the carafe with ground coffee beans and hot water, allowing the mixture to steep for a certain amount of time, then plunging down the filter so that the ground beans are separated from the water (which is now coffee).

Using a French press is manual brewing at its finest. You don’t need fancy coffee machines; all you need is a French press device (which you can find for as little as $10), some hot water, ground coffee, and a few minutes of time for the steeping process.

So who will enjoy drinking French press coffee? Well, it’s an excellent choice if you want a coffee drink that is bold, rich, and full-bodied since there’s no paper filter to take away from the flavor.  It’s also excellent for anyone who doesn’t have a coffee machine at home and wants to keep things simple.

So far, you’re probably thinking that French press coffee sounds wonderful. But nothing is perfect, and there are a few cons to using a French press, especially when you use improper techniques. Here’s what we like and what we don’t like:

Similar to the French press, pour over coffee is made by pouring hot water over coffee grounds. However, instead of combining the grounds and water in a carafe and allowing the mixture to steep, the water is poured over the beans, which sit in a cone-shaped contraption. The water then drips through the beans slowly and passes through a filter, making its way into a separate cup/container.

“It all started by a woman named Amalie Auguste Melitta Bentz. One afternoon in 1908, Melitta was unsatisfied with the dreadful taste from her percolator. The coffee was over extracted and bitter. Melitta began experimenting with different ways to brew. Melitta began with some blotting paper from her son’s school book and a brass pot punctured with a nail. Pleased with the outcome, Melitta released this new pour over brewer to the public.”

This is a great coffee choice if you like your coffee to be clear and nuanced, light and clean, and just slightly acidic. It’s also an excellent choice if you’re interested in making just one cup of coffee rather than an entire pot.

Pros & Cons of Pour Over Coffees

Just like the French press, there are both pros and cons that come along with pour over coffee:

Pour Over Coffee Vs. French Press: How They Differ

Still wondering what is the difference between french press and pour over coffee? It all comes down to the contraption that’s used. Both are “manual” coffee-making methods, but a French press allows the coffee to steep while a pour over drips water slowly over the grounds.

This results in a completely different coffee-drinking experience in terms of intensity. While a pour over coffee can be quite strong, French press coffees are notorious for a bolder, richer flavor since the beans are physically immersed (steeped) in the hot water.

Here are a few more key differences between pour over and French press coffee:

Both coffee contraptions are super easy to use, but the French press has one design flaw; the clean up process requires you to take apart the entire contraption and wash each component separately. With a manual pour over, you don’t have to dismantle anything - just toss the grounds and that’s it.

It's very hard to compare the average brewing time between French press vs. pour over. This is because the speed of brew depends on a few things, like how finely ground the beans are and how hot the water is. One thing to note about a French press is that you have complete control over the brewing time; when you’re happy with the coffee’s strength, simply push the plunger down to filter out the grounds from the water.

Because of its full immersion method, French press coffee results in a heavier, richer flavor. So if you’re looking for a big, bold taste, this is the way to go. However, using a French press runs the risk of leftover grounds, especially if you’re using finely-ground beans. If this is something you want to avoid, you might consider pour over coffee instead.

Both drinks are perfectly healthy for you - at least in moderation.

Johns Hopkins Medicine says that there are many reasons to drink coffee, stating that

“coffee is chock full of substances that may help guard against conditions more common in women, including Alzheimer’s disease and heart disease.”

The most common mistakes when making any type of coffee - including French press and pour over - usually have to do with the coffee beans. Either you’re using low-quality beans, the beans have not been ground properly, and you’re using the wrong coffee bean to water ratio. So to start, always focus on the beans, and chances are, you’ll end up with a great cup of coffee.

However, coffee beans aren’t the only source of error. One of the common mistakes for making French press coffee has to do with the steeping time. Some people allow their coffee to steep too long, while others don’t give it enough time. The ideal time is about 4 minutes, but depending on your taste preferences, you can go slightly longer or shorter than this. 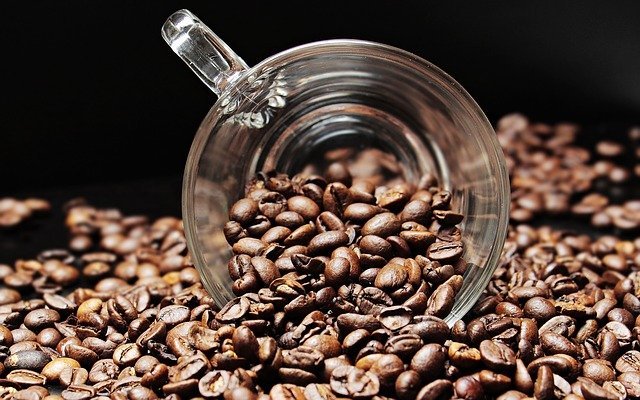 For the pour over method, there’s actually more room for error. Here are some of the most common pour over coffee mistakes to try and avoid:

What is the difference between Aeropress and these two brewing methods? 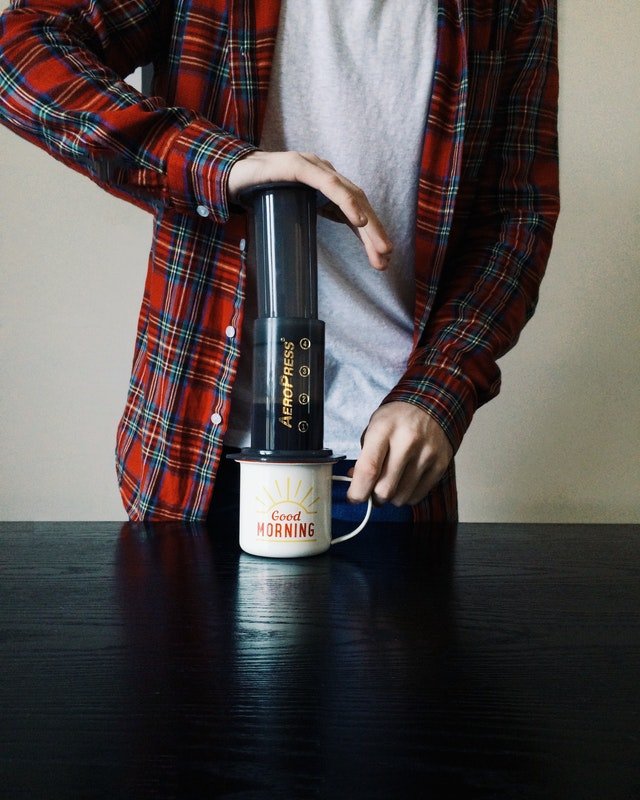 An Aeropress is a piston-style coffee brewer that forces the liquid directly into a cup after passing through a thin filter. Similar to French press and pour over coffee, it’s great for making 1-2 cups, and it delivers a clean-tasting, flavorful brew.

Yes, many sources say that French press coffee is some of the smoothest out there.

According to Greatist’s guide on how to make the best French press coffee,

“immersing the coffee grounds in the hot water during brewing makes French press coffee richer, smoother, and more flavorful than most other methods.”

What is the best type of coffee bean for French press and pour over?

This depends entirely on your personal taste preferences; some people like light-roast beans, while others prefer dark-roast. For best results, the key is to grind your own freshly roasted beans using a manual or electric coffee grinder.

Is there more caffeine in French press coffee?

Hopefully, you can now consider yourself a coffee connoisseur, at least when it comes to manual coffee-making methods like French press and pour over. The main thing to remember is that there's no right or wrong when comparing French press vs. pour over coffee; it all comes down to personal preference.

If you want a strong, rich, bold cup of coffee and don’t mind a thick texture, a French press is for you. But if you prefer a cup of joe with a subtle flavor and a lighter texture, pour over coffee is the better choice.