Nothing beats a cup of coffee, but with all the coffee drinks typically served in a coffee shop you can have a hard time keeping up.

A cortado and a latte are two popular drinks in the coffee world. Both are made with espresso and milk so when it comes to cortado vs latte, what's the difference? In this guide we'll explore the differences between the two drinks, and help you decide which best suits your tastes.

Cortado Vs Latte - Differences You Need To Know

Despite both coffee recipes consisting of espresso and milk, they don't have equal amount. This is down to the volume of the ingredients, and how they are layered.

A latte is made with 1/3 espresso, 2/3 steamed milk, and a thin layer of microfoam on top. The espresso and steamed milk combine to make a drink of 8-16oz (though you can get some larger sizes).

A cortado is made with 1/2 espresso 1/2  warm milk in an equal ratio. The espresso and steamed milk combine to give a drink of around 4oz, with the smaller amount of milk making it a much shorter drink.

The equal parts steamed milk and espresso in a coffee cortado give it a stronger espresso flavor, but it has much less acidity than a regular espresso. So, when it comes to cortado vs latte, coffee lovers shouldn't definitely chose a cortado.

Most famous espresso drinks, like the cortado and latte, have the same ingredients - an espresso shot, steamed milk, and milk froth - so it's surprising that the taste can vary so much.

The high quantity of steamed milk in the latte makes it one of the milkiest coffee beverages, and as a result the latte taste is very milky, sweet, and smooth.

A cortado with equal parts espresso and milk, therefore the cortado taste is slightly bitter from the espresso, but with a rich flavor.

The steamed and frothed milk in a latte make it the perfect vehicle for flavored syrups, and many people choose to make the coffee drink even sweeter by adding different flavors.

If you enjoy a stronger espresso flavor you'll prefer the cortado, but if you like it mild then you'll prefer a latte because it is more milk heavy.

Most american coffee shops offer popular espresso based drinks in a range of sizes - but that's not always the case.

A latte is served anywhere from 8oz to 16oz, and some chains even offer a 30oz latte. In comparison, a cortado is typically only served in a 4oz size, and you can't order anything larger.

The drink's size is probably the main difference between the two coffees. A cortado is one of those traditional espresso drinks with the same amount of coffee and milk. Altering the size would place with this balance, and ruin the flavor of the drink.

It's worth noting that the espresso to milk ratio in larger lattes doesn't change, so if you order the biggest size you will probably have more than two espresso shots in the cup.

The different espresso to milk content in a cortado and a latte is what impacts their texture and flavor.

A latte is 2/3 milk, with a 1:2 ratio  of espresso to steamed milk and foamed milk in a microfoam layer on top.

A cortado has an equal ratio of espresso to steamed milk, and the milk isn't frothed up like a latte but blended with the shots of espresso. This creates a layered effect in the cup.

The hot milk content is the key difference in cortado vs latte drinks, and it's what makes the cortado stronger in taste. There's a nice balance to both but the higher milk content and higher volume of a latte makes it easier to drink.

Coffee drinks are designed to perk you up, but it's good to know the exact caffeine content in each of these espresso based drinks.

Cortado and latte both have equal amounts of caffeine, around 90-130mg per serving from the espresso shots. This fairly standard compared to other coffees which tend to have about the same amount.

Just bear in mind that you can get very large lattes are made with one to three shots of espresso, so these may be stronger than a regular cortado.

Every coffee drink is different so it's good to know how many calories are in a cortado vs latte.

The main reason that a latte has more calories is because of higher quantity of creamy milk. This coffee and milk combination makes the espresso shots more disguised and easier to drink, but does make it less healthy.

If you want a lower calorie coffee drink you should go for a cortado over a latte, but just be aware that different syrups and sauces will add more calories to either drink.

Both cortados and lattes are made using an espresso machine, but they're served very differently, primarily because a latte is a larger drink.

A latte is typically served in a tall glass, cup, or mug which has room for a lot more steamed milk.

A traditional cortado is typically served in a cortado glass tumbler or Gibraltar glass which only has room for the 4oz drink.

One of the best things about espresso based drinks is that they can almost always be customized to meet your tastes. There are several different variations on a cortado and a latte, and you can ask your barista to add other ingredients if your desired drink isn't on the menu.

You can also ask for your cortado or latte without whole milk. Non fat milk massively reduces the calories, or you can go for a dairy-free almond milk, soy milk, or coconut milk instead. The choice of milk varies in coffee shops, but they usually have a few options.

When it comes to variations of cortado vs latte coffee drinks you can see that a latte has more options. This makes it the better coffee drink for those who like to mix it up.

What Is A Cortado? (Overview + How They Are Made)

Cortado is a Spanish word which means "cut" or "trimmed." It's a coffee drink made by with equal parts steamed milk and espresso, and is a very popular drink in Spain (though the creamy milk makes it popular internationally).

We like to think of the cortado as a drink that is halfway between an espresso and a cappuccino, but with less frothed milk and more coffee flavor. It's called "cortado" because it's cut with the addition of steamed milk, similar to how you would cut a whiskey with water. 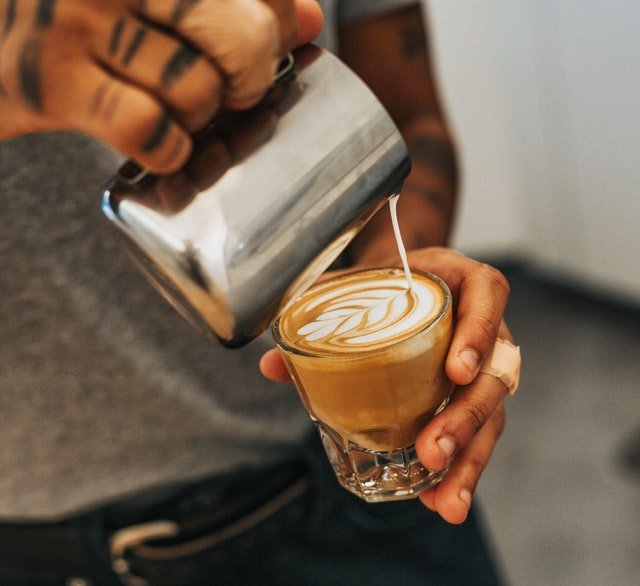 The cortado is ordered in a coffee shop by people who want something a little stronger than a latte but don't want to sacrifice the coffee taste. It's also for people who want to experiment with their coffee-drinking habits but are not quite ready for a straight shot of espresso.

To make a cortado:

What Is A Latte? (Overview + How They Are Made) 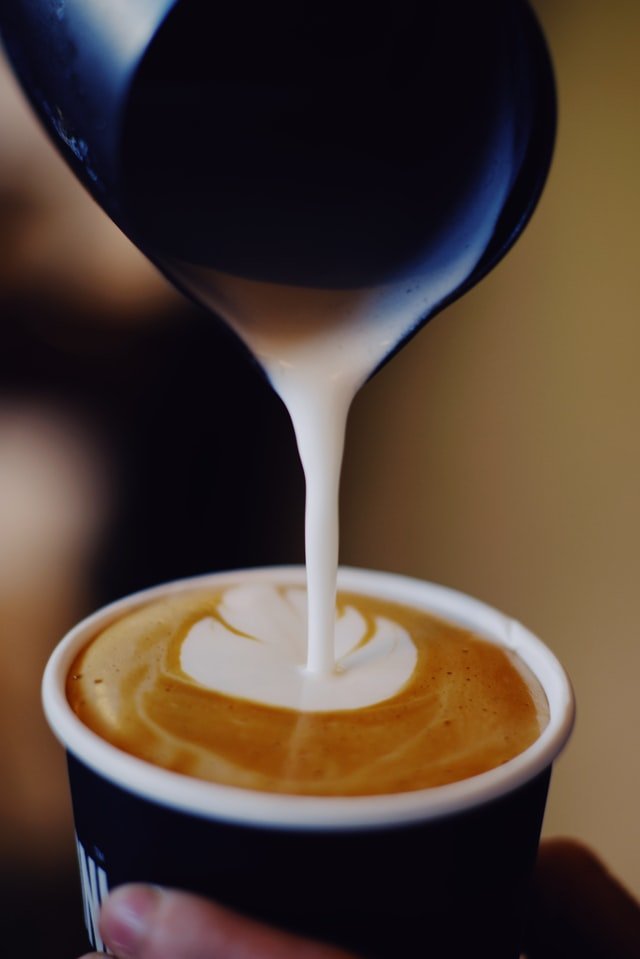 A Latte (pronounced "La-Tay") is a hot beverage made from milk foam and espresso coffee.

The milk is steamed and then poured over the espresso, which is a coffee brewed under pressure by forcing hot water over fine espresso grounds.

The latte is said to have been invented in Italy in the late 18th century, and the word "latte" comes from the Italian word for milk.

A latte is a pretty simple drink to make. It's a mix of steamed milk and espresso with a thick layer of micro-foam on top which is often used for latte art. You can make it hot or cold, and you can add different types of milk like soy, oat, or almond milk.

To make a latte:

Which Is Healthier - Cortado Or Latte?

When we consider the health choices of our favorite coffee shop order we need to think about the caffeine and the calories. So, when it comes to the healthiness of a cortado or latte, what's the difference?

Both coffee recipes contain an equal amount of espresso, so their caffeine content is practically the same, though some larger lattes tend to have a third espresso shot.

Cortados and lattes both mix espresso and milk, and it's the ratio of espresso to milk that really adds to the calories.

Cortados are made with equal parts milk and espresso so it only requires a little milk. Plus, because it's a smaller drink which only comes in one size so you only need a small amount of sugar to sweeten it. As a result, you could argue that the cortado is the healthier option because it has fewer calories simply because of its size.

In the end, the latte has a lot more milk and is only as healthy as you make it. Using full-fat milk or adding sugary syrups can quickly turn your beverage into a calorie-laden drink.

Instead of heavier whole milk, consider using skim milk or unsweetened plant-based milk (such as almond or oat) and a natural sweetener, such as Stevia. You can also reduce the calories by ordering a small latte instead of a large. 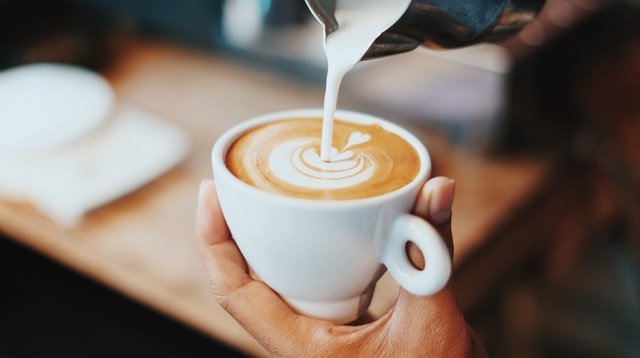 What is the difference between piccolo latte and cortado?

Is a cortado the same as a flat white? What about a macchiato?

The cortado is a very hot drink at the moment in the coffee world. There's a lot of debate over what it is and whether it's the same as a flat white. The consensus seems to be that it's a cross between a cappuccino and a flat white.

In fact, the only difference between a cortado and a flat white is the milk. The milk for a Cortado is prepared the same as a Flat White, with simply less foam.

The Macchiato has a more obvious intensity to its flavor, as it is prepared with a single shot of espresso, a dash of milk, and a dash of foam.

Why is a cortado served in a glass?

The cortado is served in a small glass instead of a ceramic cup because it's a small drink. The ceramic cup is traditionally used for longer espresso and cappuccinos because it keeps the temperature of the drink high. However, the cortado is consumed quicker, so it doesn't need to stay as hot for long.

Practical reasons aside, most coffee shops choose a glass instead of a cup simply for aesthetics.

Do you stir a cortado?

Confused about why your cortado comes with a spoon? The spoon is used to stir the espresso, mixing the layers and helping to bring the flavor out of every sip. It's important to mix everything together, so it has a good balance. Don't feel like you have to use it, but that's why it is there! 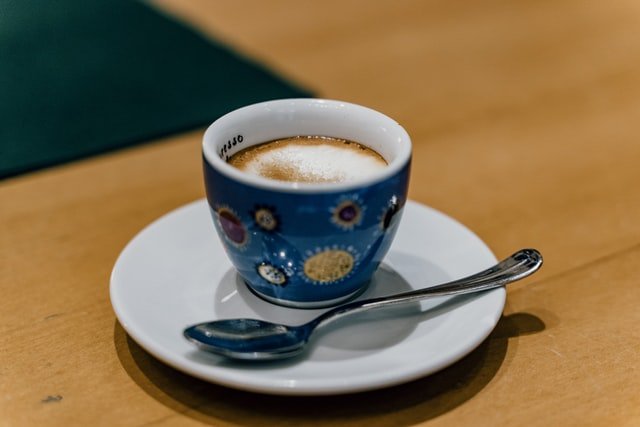 Does Starbucks have cortados on the menu?

Officially, no. Despite this, a cortado is simply espresso cut with a little bit of steamed milk, and so you may find a friendly barista ready to whip up your favorite drink for you.

Most people know lattes, when it comes to cortado vs latte what's the difference?

The biggest difference is that a latte is served with a lot more milk, whereas a cortado has an equal amount of steamed milk and espresso. This gives the cortado a stronger espresso taste, even though both drinks have the same amount of caffeine.

Hopefully you now have a better understanding of cortado vs latte coffee beverages, and you're keen to get out there and try them!