Aside from the deliciousness of coffee beverages, most people drink coffee for another reason: the caffeine boost. Drinking coffee can give you that much-needed energy to wake you up in the morning and get you through the workday, and it doesn’t hurt that it tastes good, too.

If caffeine is one of your reasons for drinking coffee, then it’s important to know how much caffeine is actually in the coffee you’re drinking. Different types of coffee have different levels of caffeine, and comparing cold brew vs. espresso is a great example of that.

While drinking cold brew coffee and espresso are both yummy ways to get caffeine into your system, the caffeine content in each is different. Let's find out more about cold brew vs. espresso in this complete comparison guide.

Cold Brew Coffee (Overview + How To Make One)

The origins of cold brew coffee can be traced back to Kyoto in the 1600s. Before the Japanese started cold brewing their coffee, they were cold-brewing tea, and a big reason for that was the fact that the cold brewing method didn’t require fire or heat.

But it wasn't until the late 1900s, early 2000s that cold brew coffee became a standard item on coffee shop menus, and it wasn't until about 2010 that major chains like Starbucks and Dunkin Donuts picked up on the trend. A 2017 study showed that US sales of cold brew coffee jumped a whopping 370%, and these numbers continue to grow.  As far as making cold brew coffee goes, the process is easy yet time-consuming. It involves soaking coffee grinds in room temperature or ice water for a long duration of time, anywhere from 12 to 24 hours. 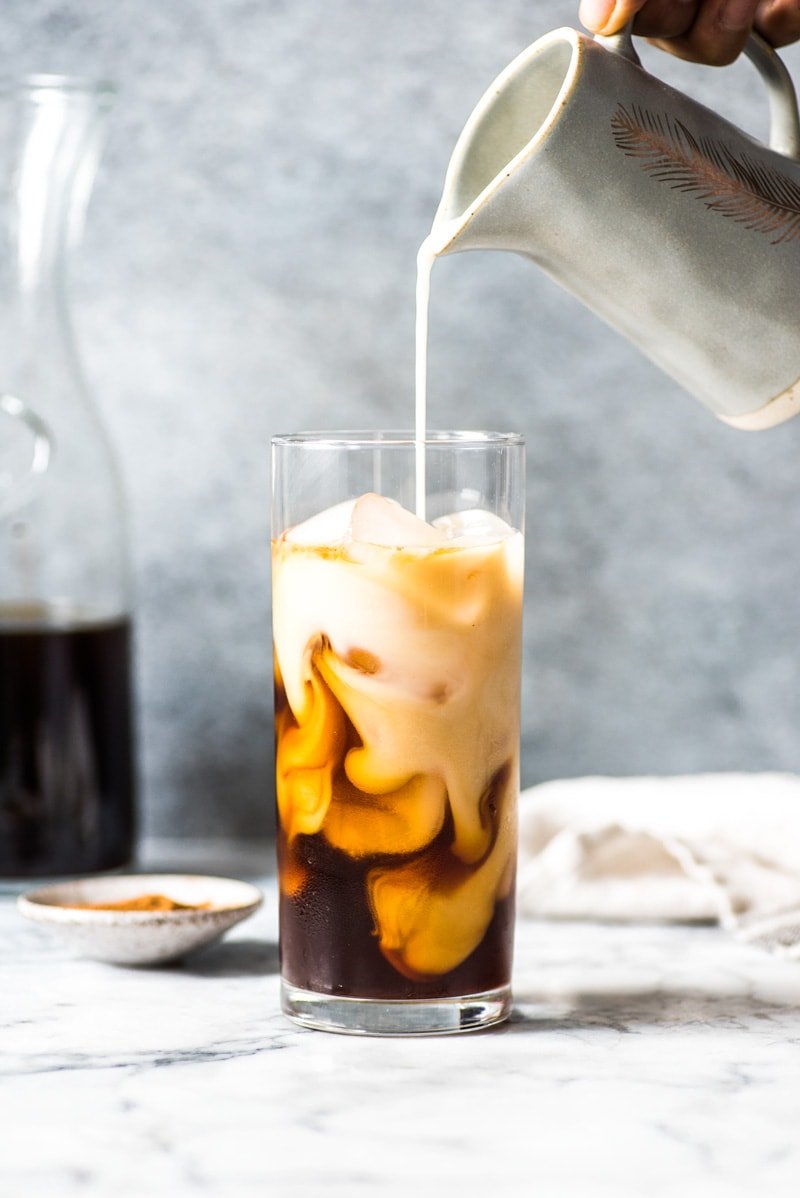 Once the coffee is ready and fully steeped, simply pour it over ice. You can leave it black or add your favorite sweetener, flavor, milk, or non-dairy milk alternative.

Espresso Coffee (Overview + How To Make One)

Like many styles of coffee, espresso originated in Italy, and it has been around since the late 1800s. Since it originated, espresso has become a common fixture in the world of coffee, and it’s loved for its full-bodied, rich flavor.

Espresso is typically made with dark roasted beans since they have a lower acidity and a richer flavor profile than other roast styles. Plus, dark roast beans have a high natural oil content, which is ideal for creating espresso crema (that thick, creamy layer on top of an espresso shot).

There are a few ways to make espresso, but the most common is to use a fancy machine that applies heat and pressure (AKA an espresso machine) to finely ground coffee beans. The process of making espresso is more intensive than making cold brew, but the brewing time is much faster (about 2 minutes).

Cold Brew Vs Espresso (Differences Between These Popular Drinks)

The histories of cold brew and espresso couldn’t be more different; while one started in Japan, the other was founded in Italy. Let's take a closer look into the differences (and similarities) of cold brew vs. espresso by comparing taste, consistency, caffeine, and more.

The biggest difference between espresso vs. cold brew is how each beverage is made.

Cold brew is brewed in a tank for large quantities, or it can be brewed in a French press for smaller quantities. First, coarsely ground coffee is added to the container, and cold water is poured over. From there, you just wait (and wait some more) while the coffee steeps either in the fridge or at room temperature, and this can take as long as 24 hours, depending on how strong you want your coffee to be.

On the other hand, espresso uses finely ground beans and hot water. Unless you get creative, it requires a fancy espresso machine that uses the hot water and pressure to deliver a potent, robust shot of rich coffee. The hot water is pushed at high pressure through the grounds over the course of a minute or so.

Both cold brew and espresso are potent and rich in flavor. However, espresso is served hot unless it's added to a cold beverage like an iced latte or an iced Americano. On the other hand, cold brew is almost always served over ice, making it a go-to option for hot summer days.

Cold brew has a much lower acidity since it is brewed with cold water vs. hot water, which means that it's less bitter and can have a more distinct flavor profile. Espresso is rich in taste, but it’s slightly more acidic. However, properly-brewed espresso uses dark roast beans, which have lower acidity and a smoother, softer flavor profile. 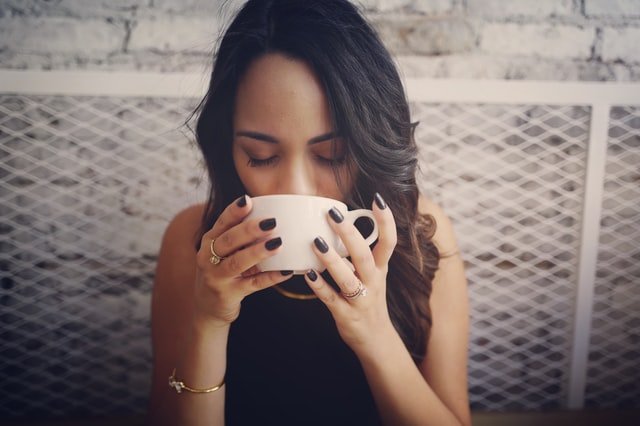 Because it’s immersed in cold water for long periods of time, cold brew coffee has a texture that’s unlike traditional coffee that’s made by hot-brewing. The overall texture depends a lot on the thickness of the grounds, which should be ground to a medium-coarse or coarse consistency. It also depends on how much water is added; cold brew is highly concentrated, so water is typically added to the final product to reduce potency.

It’s a well-known fact that espresso is thick, creamy, and highly concentrated. When properly brewed, it never comes out watery or weak, and the crema (thick layer on top) creates a silky texture and consistency.

The average shot of espresso contains about 64 milligrams of caffeine. A single shot of Starbucks espresso is listed as having a whopping 75mg of caffeine, and many of their drinks are made with 3 shots, which would add up to 225mg.

Taking a look at Starbucks Cold Brew, the beverage is listed as having 200mg of caffeine in their Grande size, which is 16 ounces. So if you were to compare a single shot of espresso to a 16-ounce cold brew, cold brew has a much higher caffeine content. However, if you’re drinking a Starbucks drink that comes with 3 shots of espresso, then the caffeine content in that beverage is 25mg more.

It all comes down to the size of the beverage you’re enjoying and the number of espresso shots in your drink.

As long as it's consumed in moderation, caffeine has virtually no negative health effects. In fact, caffeine is considered a health-boosting substance that can sharpen the mind and even lower your risk of developing Alzheimer’s.

When comparing the two, both cold brew and espresso are rich in antioxidants and can have added health benefits (when consumed in moderation). The key to keeping your coffee healthy, though, is not adding sugary substances that can spike your blood sugar and cause weight gain.

Pricewise, a shot of espresso is generally cheaper than a 12 or 16-ounce cold brew. Whereas a single espresso shot fluctuates between $2 and $3, a cold brew ranges from $4 to $6. However, if you’re ordering an espresso beverage like a latte or cappuccino, you’ll pay about the same as what you would for a cold brew.

Can you make an espresso martini with cold brew?

Yes. In fact, some people prefer using cold brews for their coffee-flavored martinis. Cold brew is just as robust and flavorful as espresso, and if you use cold brew concentrate instead of espresso, you won’t have to worry about a hot shot of espresso melting the ice, which could dilute the cocktail and affect the drink’s overall flavor.

Does cold brew make you poop?

Yes, cold brew can speed up digestion and create the urge to poop. But it’s not just cold brew that will promote going #2; caffeine is responsible for sending you to the bathroom, and espresso - or any coffee drink for that matter - can have the same effect.

Healthline did a recent study on coffee and digestion, and the source found that caffeine “can activate contractions in your colon and intestinal muscles. Contractions in the colon push contents towards the rectum, which is the final section of your digestive tract.” This is what’s ultimately responsible for creating that urge.

Can I drink espresso every day?

Yes, it's perfectly fine to drink espresso every day as long as you don't have an adverse reaction to caffeine. Just remember that caffeine should only be consumed in moderation, and drinking multiple espresso shots can spike your blood pressure or even increase anxiety. One or two shots of espresso are generally fine, but try to avoid overindulging.

To recap, the main difference between cold brew and espresso is how each type of coffee is made. Cold brew uses a “cold brewing” process that takes lots of time but minimal effort, whereas espresso is brewed hot in 2 minutes or less, but there are more steps involved.

In terms of caffeine, cold brew will give you a bigger energy boost, especially if you’re drinking from a 12 or 16-ounce cup. While a single shot of espresso has between 60 and 75mg of caffeine, a large cold brew can have anywhere between 150 and 240mg of caffeine.