Coffee creamer makes a great alternative to milk in coffee drinks. However, many people think you can't froth creamer, so you get the same frothy layer on top for cappuccinos and lattes.

That's not the case though, and you can froth creamer yourself, and in this guide we'll show you have to go about frothing coffee creamer simply so you can enjoy your favorite coffee drink at home.

What Is A Coffee Creamer? (Comparison To Milk)

When you add milk to coffee, bitterness and acidity are subsumed into sweetness, the thinner consistency gains more body, and the texture becomes fuller and creamier. Altogether, this creates a pleasing mouthfeel that many coffee aficionados find superior to espresso without milk.

Coffee creamers are designed to have the same effect minus the filmy texture you get from milk fats. For the most part, creamers are made without milk for dietary or storage purposes.

Coffee creamers come in many different styles and flavors.

They can be sugar-free, low-sugar, organic, fat-free, non-GMO, or any of a slew of other variations for the health-conscious consumer.

Before you start frothing creamer you need to know which you're using. There are 3 main types to choose from:

Powdered coffee creamer, as the name suggests, is in powder form. It's typically added straight to liquid , usually hot or iced coffee, and then dissolves. The drink will then turn cloudy and it will have a similar effect to adding milk to your cup of coffee.

People use powdered creamer because it has a long shelf life. It's typically made from dehydrated corn syrup, vegetable oil solids, and dairy derivatives like the milk protein casein.

If you want to make powdered frothed creamer which is similar to frothed milk, then you need to add it to water or milk first, and then froth it up with a steam wand/frothing wand or other method. You can then add it directly to your cup of coffee

A liquid creamer is very similar to a powdered creamer, but it's already been diluted. You use cold liquid creamer in the same way as regular milk, adding it straight into your coffee drinks.

It's one of the favorite coffee creamer options because there's a long shelf life and no need to refrigerate. They usually contain hydrogenated vegetable oils and condensed milk.

You can choose from several cold liquid creamer flavors, so it's great for those who want to create froth flavored creamer for your coffee.

It's easiest to use this type to create a frothed creamer, and it's closest to frothed milk.

Plant based creamers are available in liquid or powder form. They're typically made from hydrogenated vegetable oil and a dairy free milk, like almond milk or oat milk.

The key difference is that they don't contain the casein protein found in dairy creamers. Other than that the taste is similar and it works well as a frothed creamer to replace froth milk.

A lot of people actually prefer a plant based frothing creamer made from corn syrup solids and hydrogenated vegetable oil because it has a longer shelf-life, and has some health benefits. [1] 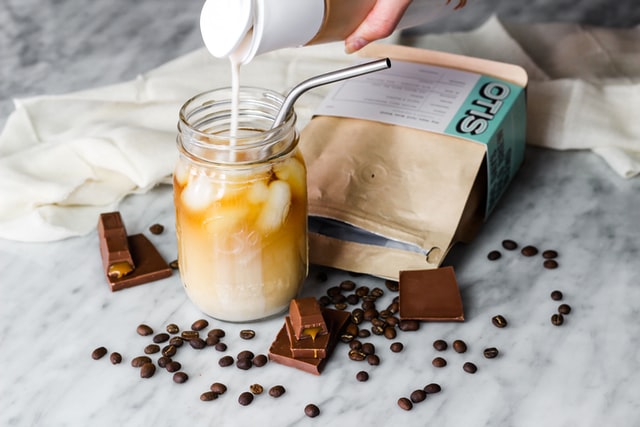 Can You Froth Coffee Creamer In Milk Frothers?

Tools for frothing coffee cream fall into one of the following general categories:

These are the easiest and often most effective, but they can also be expensive. A fully automatic milk frother only requires you to add the coffee creamer, press a button, and wait.

When you're frothing coffee creamer, you can either pour in liquid creamer or mix powdered creamer with a bit of water and add that in. An automatic milk frother works well with dairy creamers or non dairy milk alternatives.

These are generally the most expensive method for frothing creamer, but they work well if you're using a non dairy creamer to create a coffee creamer foam for your cup of coffee.

On the opposite end of the spectrum are hand-pumped frothers. You can still froth coffee creamer with these and create a cold foam, but you have to put some elbow grease into it.

The mechanism for frothing is usually on top of the lid and looks like the plunger you would see on a French Press. Unlike the French Press, you need to pump this one repeatedly.

A blend of the first two models, electric milk frothers are countertop models that aren’t fully automatic. You might have to put a cup in place and withdraw it at the end or arrange it underneath a frothing wand when you blend your coffee creamer.

An electric milk frother is an affordable option for coffee drinkers and are effective at frothing milk or frothing warm creamer.

A hand-held frothing wands looks like a smaller versions of a stick blender. The end is most often a round spiral piece around the vertical wand section. You press a button after the spiral is introduced to the coffee creamer and blend until the froth is formed.

You can find a steam wand or frothing wand online or in most big stores and they aren't expensive, so they're a great way to get a frothy coffee cheaply. 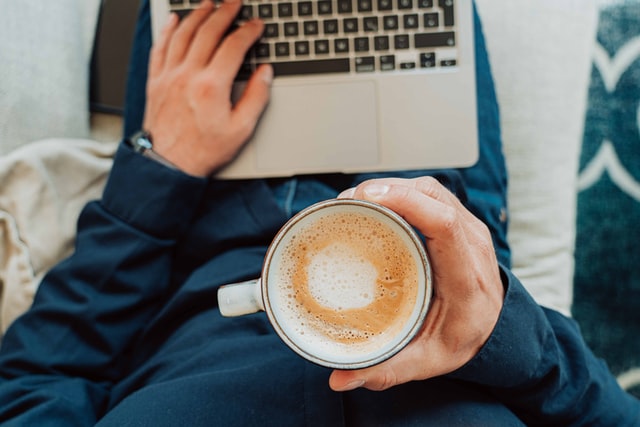 Frothing coffee creamer can be done, but different brands might froth better than others. Milk froths well and keeps a stable foam based on its fat and protein content - dairy or non-dairy, coffee creamers, and whiteners sometimes don't compare to foam from milk.[2]

Adding liquid creamer will enrich the flavor of the coffee, and adding foam on top of that will make the mouth feel more airy and tamper some of the richness, which can be overwhelming, especially if you prefer mochas and other drinks with syrup in them.

Whether you want to make a drink with big bubbles like a cappuccino, microfoam like a flat white, or something like a latte where the foam takes up less of the cup, coffee creamer can be frothed for the job.

You can froth creamer instead of milk. Liquid creamer with a higher oil or fat content is better for large bubbles and a dry foam like you want for cappuccinos, while high-protein creamers (with or without casein) work better for microfoams.

You know you have a good foam when the bubbles reach about half an inch (minimum) and stay that way when you stop churning.

Different Ways To Froth Coffee Creamer (Without A Milk Frother)

You can make coffee creamer frothy with any of the following methods:

Since the French Press won’t warm the creamer up for you like an espresso machine, you have to warm it first if you want a hot frothed creamer. If you’re using dry coffee creamer, mix it with warm water first.

These work as a great milk frother for either hot or cold coffee creamer, making them ideal for cold frappes or Freddo espressos.

You can use a regular blender or an immersion blender to froth creamer. Just make sure you have a vessel that won’t spill or tip over with the force of the blending when you froth creamer.

Coffee lovers are creative, and there's lots of ways to froth creamer and create hot and cold foam, or froth up dairy or non dairy coffee creamer at home.

One of the best ways to froth creamer at home on the fly is to grab a mason jar with a firm lid. Pour the creamer inside, tighten the lid, and shake the jar for a while until your foam has formed. A mason jar works with non dairy or dairy milk and you can add it straight on top of your cup of joe. Just bear in mind that it won't give you warm creamer.

You can also use an old-fashioned non-electric whisk as a handheld milk frother and just beat your coffee creamer like you would eggs. It will form bubbles faster than you think and give you a creamy texture. Plus, you won't have to go through the hassle of cleaning up any of the electric contraptions we mentioned earlier. 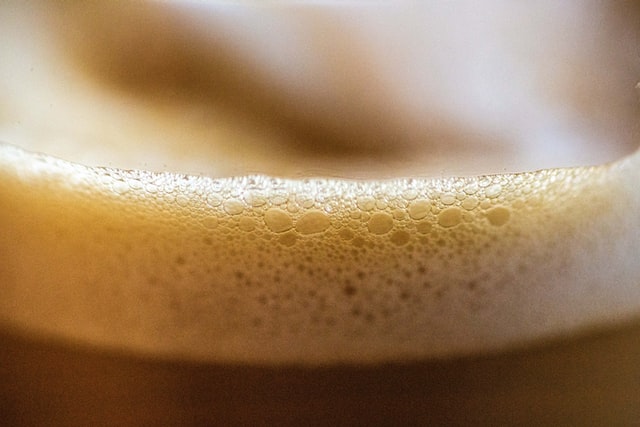 Can you froth Coffee-Mate Creamer? What About Starbucks creamer?

You can froth Coffee-Mate and froth Starbucks creamer as long as they aren’t liquid creamer concentrate. These denser recipes are meant to be added straight to the coffee and don’t have the necessary proteins within them to make bubbles and lasting foam.

Can you make your own coffee creamer?

Making your own coffee creamer is a fantastic way to cut out excess sugar from your diet and avoid the processed ingredients found in many of the most popular brands of coffee creamer.

For a basic DIY coffee creamer, all you need to do is combine condensed milk, a little whole milk, maple syrup, cornstarch, and some french vanilla extract or something similar for flavoring.

Can you drink creamer by itself?

Although you certainly can, it’s not going to be the nicest flavor experience you’ve ever had. While frothed coffee creamer adds a delicious full flavor and mouthfeel to your espresso drink, it’s a bit lacking on its own.

Can you froth cold creamer?

You can certainly froth cold coffee creamer, and in some cases, you should. For example, if you're using an espresso machine to froth your creamer, it will heat it for you so you can start with cold creamer and a cold frothing pitcher.

Can you froth sugar-free creamer?

As long as the creamer has enough protein, you can froth it. Look for ingredients like the milk protein casein on the ingredients list if you aren’t sure. Those looking for a dairy alternative can consider sugar-free soy milk as an option.

If you want to switch from whole milk or skim milk to coffee creamer there's no reason you can't get a great layer of milk foam.

You can froth creamer really easily, and you don't need any kind of specialist milk frother or steam wand either.

Hopefully this guide has introduced some easy ways to froth creamer and you can now enjoy a frothy coffee at home.