Everyone is familiar with the debates between fruits and vegetables. For example, eggplant is used and considered a vegetable, even though scientifically speaking, it is a berry that is regarded as a fruit. The same with okra and cucumber too. Another thing that’s surprisingly part of this debate is coffee. We all know that our favorite java comes from a plant, but are coffee beans considered a fruit, too?

In this article, we will discuss whether coffee beans are considered a fruit or not and other information about the coffee beans that can help you win your next fruit or vegetable debate.

Page Contents hide
Is A Coffee Bean Actually A Fruit? Or Is It A Vegetable?
What Is The Fruit Of The Coffee Plant Called? (An Overview)
Coffee Fruit Vs Coffee Bean (Differences Explained)
Frequently Asked Coffee Beans & Fruit Question
Conclusion

Is A Coffee Bean Actually A Fruit? Or Is It A Vegetable?

Are you ready to settle this question? If so, let’s begin. We first need to establish the difference between fruits and vegetables. This may sound elementary, but many people get their difference wrong right off the bat. The most common answer you’d get if you ask how they differ is that fruits tend to be sweet and vegetables are savory. Sounds correct, right?

Unfortunately, it’s not. While it’s true that most fruits are sweet and most vegetables are savory, that’s not how you can distinguish them from one another. Fruits are the reproductive product of a plant and not an actual part of it.

This product usually carries seeds in them like apples and mangoes. That’s why tomatoes and squashes fall into this category because they have seeds in them, and they are the reproductive products of a plant. On the other hand, the vegetable is an edible part of a plant, like a carrot, potato, or onion.

Now that you know the real difference between the two, we will discuss what a coffee plant is. The coffee plant, sometimes called a coffee tree, is a large bush with branches that grow dozens of oval fruits that go from green to dark, ruby red, occasionally yellow or purple. The fruit is called a coffee cherry, but don’t be fooled by its name. It’s not technically a cherry.

At first glance, the coffee cherry looks like a berry. But like its name, its looks can also be deceiving. The coffee fruit is not a berry, and berries are not what many people think they are.

One misconception about berries is that we usually associate the name with fruits like strawberries, blackberries, and blueberries. However, from this list of supposed-to-be berries we just enumerated, only blueberries qualify as one, scientifically speaking.

You probably think that this is more complicated than you thought it would be. Well, it is. And each piece of information is vital to understanding whether or not the coffee bean is a fruit. Going back, berries are fleshy fruit that has thin layers all over them.

The most common botanical berries that would surprise you are tomatoes, eggplants, and bananas. So, for a fruit to be qualified as a berry, it should have a fleshy layer, right? Does this make coffee cherry a berry? 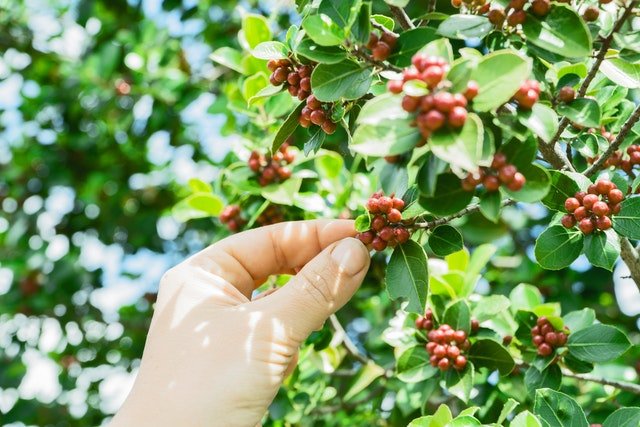 Still no. The layer around the coffee fruit is tough and not as soft as it looks. So coffee cherries are not berries. But now, we’ve established that coffee cherry is, in fact, a fruit; shouldn’t we stop here? Not yet.

For you to win your next fruit-or-vegetable argument, you need all the points you need. So now, we will discuss how botanists classify the coffee plant so we can correctly identify what a coffee bean is.

The coffee cherry has a hard parchment layer instead of a soft one, disqualifying it from becoming an actual berry. But there’s a type of fruit with this characteristic, a drupe. This makes coffee cherries a drupe. Some of the most common drupes we know are peaches and mangoes.

What Is The Fruit Of The Coffee Plant Called? (An Overview)

The coffee fruit is called a coffee cherry. Its name comes from its resemblance to ordinary cherries. Despite their similar looks, these two fruits are not related except for being both drupes or stone fruits. Like any plant, the coffee plant comes in different species and varieties, each with its own characteristics.

But in general, coffee cherries grow in clusters along the branches of the plant. Each cherry grows as big as the size of a small grape. All unripe coffee fruits are green and become red, yellow, purple, or orange when ripe. The final color of the coffee cherry depends on the variety of species of the plant. However, the majority of the coffee plants in the world produce red fruits.

Red coffee cherries are preferred mostly because they’re easier to identify when ripe. The fruit starts out green, then yellow, and finally red. It is crucial for farmers to determine whether or not the cherries are ripe as mature cherries have more sugar in them, which impacts the quality of beans they produce. If they harvest unripe fruits, they often have a fish-like smell and make low-quality beans that have less flavor. 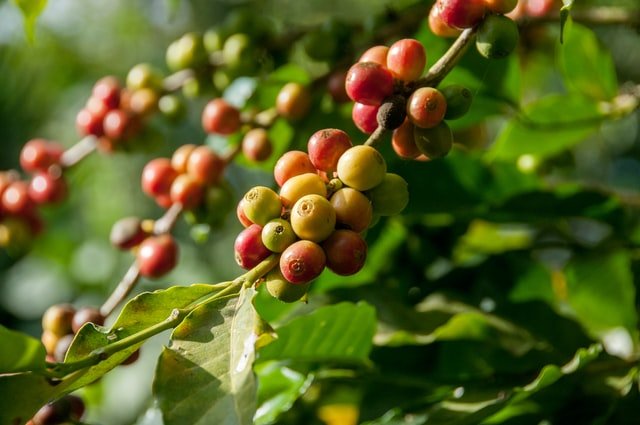 The coffee cherry’s anatomy is similar to stone fruits like peaches, mangoes, and plums. All stone fruits consist of several layers, which can be divided into two main parts: the fruit pulp and seed (bean).

Underneath the skin of the coffee cherry is a layer of fruit that is edible. This fruit has a pleasing sweetness with refreshing acidity. However, the coffee cherry has very little edible fruit as the beans mostly occupy the space.

At the same time, the taste of the fruit is nothing like the coffee beans we know. This isn’t really a surprise since the raw, green beans found in the cherries also don’t have any of the aroma or characteristics of the coffee we drink.

This is because it still needs to undergo another process called roasting. The coffee beans in the fruit are naturally green in color and will only turn brown after it’s roasted.

The coffee plant produces a fruit called a coffee cherry, which houses the coffee bean. This extracted bean is roasted, producing the coffee we all know and love. Each fruit usually contains two coffee beans. However, some varieties have fruit with only one bean, which is considered to produce a stronger, richer flavor than regular beans.

So how do the fruit and bean differ? In terms of caffeine, the fruit has significantly less than the bean, making it an excellent option for people who are sensitive to caffeine and looking for alternatives to coffee.

In addition, they have different amounts of antioxidants. Coffee beans have fewer antioxidants because of the roasting process that diminishes the levels of chlorogenic acids.

Lastly, they are processed and consumed differently. Coffee beans are typically roasted and sold as whole or ground coffee. On the other hand,  the coffee fruit is extracted and is usually added to supplements and drinks for nutrients or extra flavor. 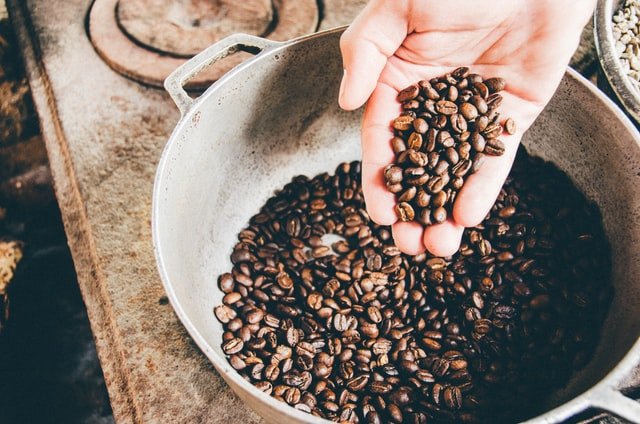 Where do coffee beans come from?

Coffee beans come from the fruit of the coffee plant known as the coffee berry. The beans are technically the seed of the fruit.

How do you know when coffee cherries are ripe?

No, not in a scientific way. However, because of their shape, they are called beans.

No, it is not. A nut usually has a hard protective covering outside, which coffee beans don’t have.

While the coffee plant bears fruit, called the coffee cherry, its beans are not technically a fruit. Instead, these beans are the seeds of the fruit. Hopefully, this guide has settled the confusion around coffee beans and explained why they are not fruits or vegetables.