If you love preparing coffee, learning about the different brewing methods can help you find the best one, but it shouldn't stop there!

Apart from different methods, the materials of the brewing device can also affect the coffee you produce.

For Moka pot lovers, one common dilemma is choosing between a stainless steel Moka pot and an aluminum Moka pot.

They may seem like the same material, but they are very different and can produce better coffee.

So what are the differences between aluminum and stainless steel Moka pot? Let’s find out!

Before we dive in with stainless steel Moka pots and aluminum Moka pots differences, let’s briefly discuss what a Moka pot is.

In case you’re not aware, this brewing device has been around since the 1930s. It was invented by Italian engineer Alfonso Bialetti and was originally made with aluminum.

While it was named after the Yemeni city of Mocha, this device was created in Italy and became popular around the world--thanks to its rapid way of preparing strong coffee in just around 5 minutes. That’s why it was also called Bialetti Moka express.

The original Bialetti Moka pot was made of aluminum, but now, this brewing device is made in different materials to accommodate different needs.

Do note that they all have the same parts or chambers; the only thing that's changed is the material used in them.

Without further ado, below are the major difference between the stainless steel Moka pot and the aluminum Moka pot: 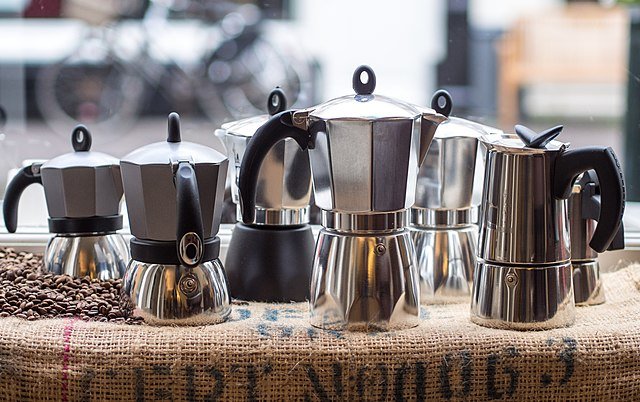 The most important thing you should consider when buying any device to brew coffee is its safety.

Of course, you'll be using, so you need to ensure that the coffee you'll be consuming doesn't have any chemicals that may harm your health.

There are some discussions about the potential health hazards of using aluminum devices for your coffee.

So, are aluminum Moka pots safe? According to some studies, consuming aluminum can cause dementia and Alzheimer’s disease.

However, this was discredited by Alzheimer’s society, stating that there is no convincing relationship between the amount of exposure to aluminum in the body and the development of Alzheimer’s disease.[1]

At the same time, aluminum is one of the most abundant metals in the world, which can be found in everyday things like pop cans, cosmetics, antacids, and even food additives.[2]

So, there’s no reason for you to be scared of aluminum - whether in Moka pots or other kitchen devices. But if you want to play safe, go with stainless steel Moka pots instead.

When looking for any stovetop espresso makers, one important thing you should look for is durability. Even though some can be cheap, you're still shedding some cash, so ensuring they are worth your investment is a must.

In general, aluminum is sturdy, but it's also lightweight. It is also softer than stainless steel, so it's easier to create different Moka pot shapes and sizes with this material.

However, with continued use, it reacts to various foods and is likely to show stains. In some situations, it can affect the taste and color of coffee after the pot is used for an extended period.

Lastly, it is less durable compared to stainless steel models. It also corrodes and scratches quicker.

On the other hand, stainless steel is heavier and denser than aluminum. This makes it last longer, making them a better investment.

It is also scratch-resistant and corrosion-free, which is why a stainless Moka pot is a better option when it comes to longevity.

If you’re looking for something cheap, you’ll never go wrong with aluminum Moka pots. Aluminum is cheaper compared to stainless steel, that’s why you can find it in most kitchen appliances.

Aluminum Moka pots are also easier to produce than stainless Moka pots. So, if you’re on a budget, an aluminum pot is a good choice.

However, if money isn’t a problem, investing in a high-quality Moka pot is a better move. Not only can they last longer, but they can also brew amazing coffee.

A Moka pot is an excellent device for brewing coffee. It extracts flavor from coffee beans better than other coffee makers because of the steam heat.

No matter what material is used to make a Moka pot, all use the same design, so the brewing process is the same.

Even though the brewing process is the same, the resulting cups of these two materials can be different.

This allows for better flavor extraction, letting the oils and the rich aroma of the coffee grounds draw out to the cup.

However, the same material can also alter the flavor of your cup. For one, aluminum Moka pots tend to alter the taste of the coffee, especially if used for a long time.

It can sometimes produce a metallic taste since the acids of the coffee react with the aluminum. In some cases, these acids can cause stains and corrode the aluminum stovetop espresso maker.

Stainless steel pots don't react with the acids in the coffee, even with continued use. While they can't heat faster, they can still brew the perfect cup.

Unlike aluminum Moka pots, they don't corrode, so the flavor doesn't change, regardless of how often you use them.

Moka pots can be classified as manual espresso machines. Instead of automatically brewing a shot in just a few clicks, it is designed to work on various stovetops like an induction stove, gas stove, and electric stove.

It basically uses the steam of boiling water from the bottom chamber to produce a great coffee in the top chamber. That’s why it’s a great espresso maker, regardless of the material it’s made of.

Just be careful of using aluminum models. As mentioned, they can produce a coffee that has a metallic taste, especially if you’ve been using them for quite some time.

Aluminum Moka Pots (Who Is It Best For?)

To help you find the right Moka pot for you, we have listed below the aluminum Moka pots' pros and cons: 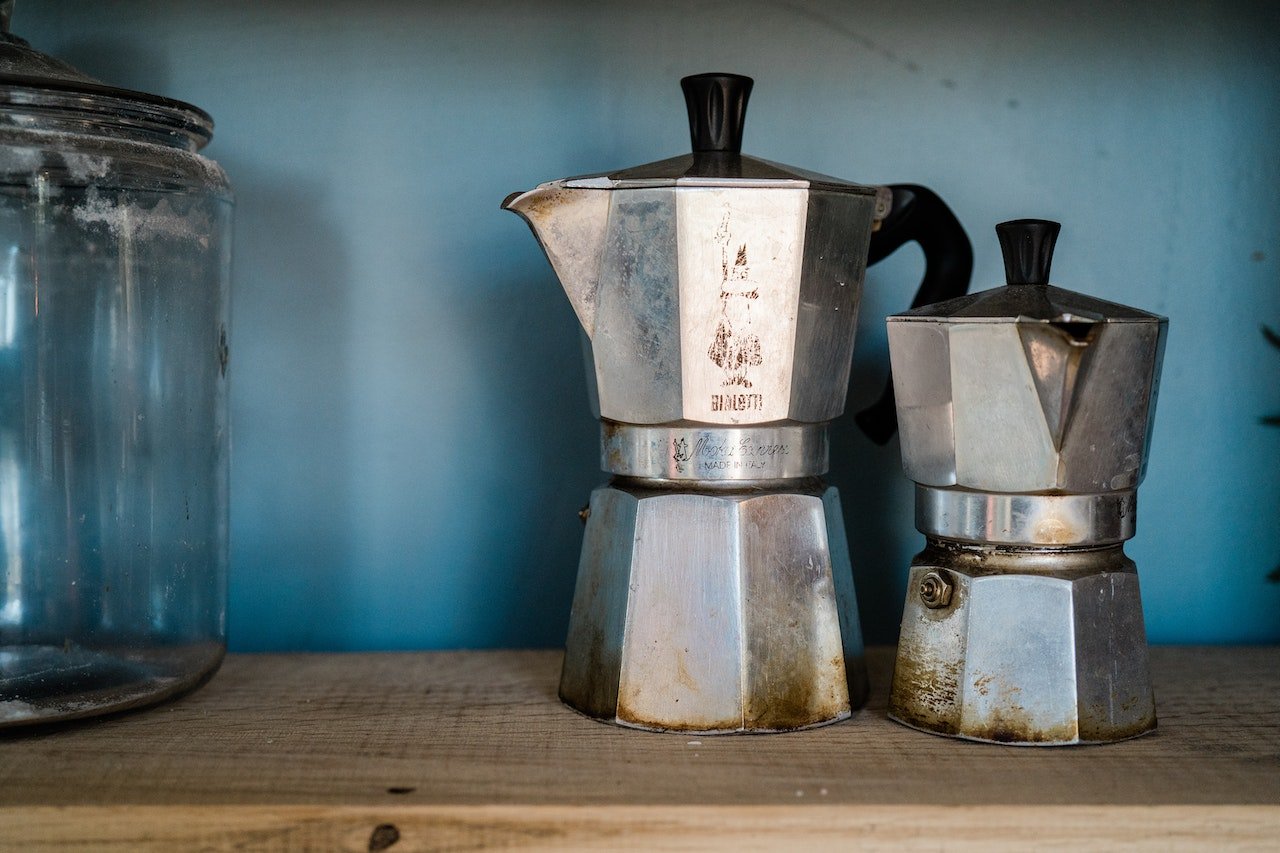 Aluminum is a great heat conductor, which is why it's excellent cookware.

Although it's good for heat conduction, it doesn't necessarily mean that it can retain heat longer. It actually loses heat quickly as fast as how it heats up.

It also takes more energy to heat aluminum than stainless steel. However, the aluminum coffee maker can distribute heat evenly, compared to stainless steel ones that get hotter in certain areas.

Because aluminum conducts heat evenly, the water gets hot faster, producing a closer to ideal extraction temperature than stainless ones.

Come In A Variety Of Shapes And Colors

Aluminum is a softer metal than stainless steel. This makes it easier to shape and cut, so it’s easier to find different shapes of this type of Moka pot.

Aluminum ones also come in various colors. Thanks to a process called anodizing, aluminum Moka pot manufacturers can apply color to this metal easily.

Since aluminum is the most abundant metal on earth, it can be found easier than stainless steel.

They're also easier to work with, which makes manufacturing them easier and cheaper. Still, the price will also depend on the brand.

Some brands that have a special feature, for instance, electric models, may be just as expensive or even more than stainless steel. But in general, they're more affordable.

While some can last long, aluminum pots don’t last as long as stainless steel ones. Aluminum also reacts with the acids found in coffee, which can affect the taste of the cup.

It’s also not scratch-resistant and corrosion-free, so you may need to buy a new Moka pot after a short period.

Who Should Buy Aluminum Moka Pots?

If you want an espresso machine but are on a budget, an aluminum Moka pot is a great alternative.

While the brewing process is a bit tedious compared to the actual machine, it can still provide an almost similar espresso cup.

At the same time, people familiarizing themselves with the Moka pot brewing process can start with aluminum Moka pots first.

This allows you to learn the ropes of this device and understand whether it's the perfect brewing method for you. They can work with electric stoves too, just in case, a gas stove isn't available.

Lastly, this option is ideal for those who don’t mind a little corrosion after a couple of uses. This material doesn't preserve well, so using it a lot can affect its appearance.

Stainless Steel Moka Pots (Who Should Consider It?)

Is a stainless steel pot the one for you? Let’s find out: 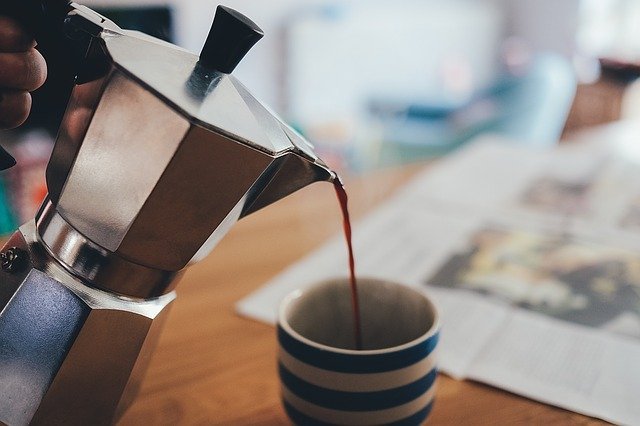 Stainless steel is made up of iron, nickel, and chromium. The chromium in the stainless steel makes it resistant to rusting and corrosion.

That's why it's easier to clean compared to aluminum ones, which oxidize faster, making them look dirty. So, if you like your Moka pot clean and good-looking, a stainless steel one is an ideal choice.

Stainless steel is denser and stronger than aluminum. This makes it more durable and scratch-resistant than aluminum Moka pots.

That’s why they are a better investment than their aluminum counterparts.

Induction stoves rely on magnetic fields to produce heat. For your Moka pot to work on this type of stove, it must have a magnetic bottom or material.

Aluminum isn't magnetic, but many stainless steel pots are.

Stainless steel is heavier to carry than aluminum ones. But this shouldn’t be much of a problem as they are small in size.

If you're on a budget, this isn't for you. It's quite expensive, and cheaper options are limited.

Takes longer to heat up

While the heat stays longer in stainless steel pots, they also take longer to heat up. You may need to wait a bit longer when you make coffee using this type.

If you’ve been using Moka pots for a while and want something that can last for years, get a stainless steel Moka pot. It’s a good investment, given that they’re durable and long-lasting.

They can also look more sleek and modern than aluminum ones. So, if you care about the overall look of your kitchen, you’ll never go wrong with this Moka pot.

What material are Bialetti Moka Pots made of?

The Bialetti Moka pots are made of both aluminum and stainless steel. Their Italian coffee makers are both safe to use, regardless of the material.

No, they don’t. Thanks to the chromium found in these Moka pots, stainless steel Moka pots don’t rust. They’re also easy to maintain and don’t require special treatment.

Do Moka pots get moldy?

Yes, it can. If you don’t wash your Moka pot regularly and allow coffee to stay in it for long periods, you’ll surely get mold in it.

How do you keep Moka pots shiny?

If you want to keep your Moka pots shiny, soak them in water and vinegar for 30 minutes every month. Just make sure you remove all the parts so that every corner will be polished and shiny.

For coffee lovers, a Moka pot is an easy way to brew good coffee. But make sure you choose the right material for your needs.

If you want a Moka pot that looks interesting, you can find aluminum Moka pots in various shapes and sizes.

If you want one that can last long, choose a stainless steel Moka pot instead.